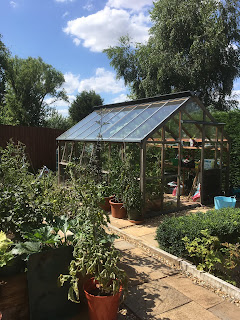 I almost stopped this blog soon after starting it. I had started it while not in a good place: my sister was nearing the end of her life after a battle with cancer. (And yes, I call it a battle because it was. She was never going to win and she knew that but what was she supposed to do? Lie down and wait? Well, I wouldn't have criticised her if she had but no, she fought it hard.) She died two days ago and the last thing I thought I'd be doing so soon after was writing on a blog I should never have started and had decided quietly to stop. 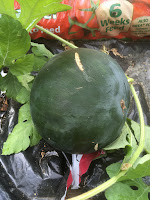 But I'm a few things and one is a writer and another is a gardener. I garden for goodness, as I explained. And a very large part of the goodness I garden for is mental wellbeing, which I specialise in as a writer and speaker. Gardening is part of how I practise what I teach. 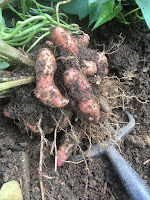 Now, more than ever, I need my garden and my writing. Whether it's collecting far more tomatoes than one person can use, weighing my watermelon (I KNOW!), being ridiculously amazed that something has appeared from the ground after incredible frosts, pottering in a greenhouse when it's raining outside, laughing at wonky veg, or (one of the very best things) digging potato
treasure from the ground, it's healing for heart and mind and pretty good for the body, too. 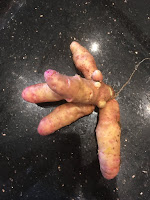 I arrived back from my sister's house late last night and went out into my garden with my torch. Well, OK, partly I was trying to find the package that a delivery company said was in my greenhouse. It wasn't. Turned out that my lovely neighbour, who had been watering and picking for me while I was away, had kindly unpacked it and put the plants safely. Thanks for all your help, Verity! 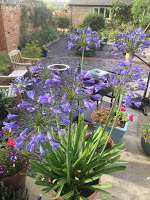 Anyway, it was really just an excuse to go into my garden and start to heal and breathe. I went into the greenhouse (obviously these photos were not taken at night...) and picked (ate) tomatoes in the dark. I brushed against salvia leaves and inhaled their intensity. I went and stood in my veg garden and listened to owls. I inspected my watermelon. The agapanthi almost glowed in the light of a near-full moon. 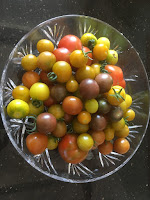 Throughout the last weeks and months of my sister's illness - only five months but it feels like a lifetime and yet so short - my garden is one of the things that's kept me sane. (Running, work, family and friends are the others. With a few measures of wine and chocolate thrown in.) I work at home and my increasing workload (not complaining!) means it's very easy to stay at my desk far too long but my office is in my garden so it's also very very easy to leave it and go and sow, pick, water, stake, weed something. In fact, if I don't, it will die. And that would never do. That's a battle I can fight and win.

One thing I couldn't see last night was the bed I created for Jo. I started it earlier this year, when she was first ill, digging in anger and sadness - and violently because I could hate the builders who left so much outrageous rubble under the lawn where I was digging. Blisters, jarred shoulders and a pulled back muscle were my penalties for not regulating my emotions a bit better! About a week before she died I sent her a video of it. I'd told her I was making it for her, to remember her by, and she loved the idea. She told me, though, that it was interesting that I was angry, as she never had been. I'm not any more. I wish she'd seen it.

It's a modest bed, but then Jo was. It will grow better. But it has transformed a boring fence and I will walk past it every day and see it from my office desk. It will remind me to look after myself and stay well. It has colour for every season: three different clematis, Penstemon King George 5th, aucuba, several salvia, abelia, pyrocanthus, a magnolia and an everlasting sweet pea.

I hope your garden keeps all of you well, too. 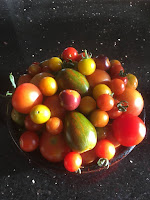 A beginner guide to growing tomatoes

Sunlight on gorgeousness "Shimmer" - tasty, firm, easy and pretty I've grown tomatoes forever but only in the last four years have I had the space and climate to grow more than I can eat. Far more than I can eat, and I can eat a lot  of tomatoes! So they get roasted by the kilo and frozen in soups and purées, but not before dozens of kilos have been eaten raw, shiny under the best olive oil and a touch of salt. Maybe some homegrown basil. This year, once more, I sowed around eight varieties, ordered a few grafted plants and ended up with around 70-80 strong specimens. Many have now gone to people in my village and some of those people have asked for tips about growing them. And sending a tomato plant to someone who doesn't know how to look after it is like handing your baby over to someone who can't change a nappy. Not acceptable! One day's harvest during July 2019 But I wasn't 100% confident that how I change nappies is how you'r 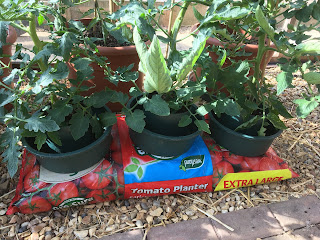 Anyone who's ever used grow bags knows that watering is a pain: unless you're really careful and pour verrrrrry slowly, the water spills over the edge and is wasted. I have simple solutions. I don't know what these are called (below) but I bought them a few years ago.  Highly recommended but there's a financial outlay at the start. My tomato plants are so verdant (excuse boasting) that you perhaps can't see exactly what you're looking at but you're looking at robust plastic rings with an inner ring and, between the two, a reservoir with holes. The plant goes in the inner ring, allowing the roots to go deeper than if just using a bag. You pour water in the reservoir but also directly onto the inner ring. Any overflowing water from the inner ring goes into the reservoir. Simple and satisfying. I know what these are called: plant pots. Simply part-bury and pour the water in. I also know what these are called. Bottomless flowerpots and half plastic 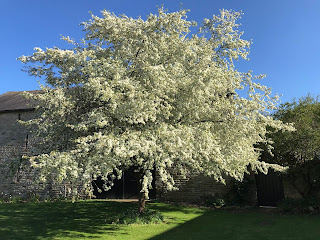 This year we can't see each other's gardens. No one will be able to admire my peonies when they burst forth, which is nothing short of a personal tragedy. But, thanks to the power of the online world, we can all see what each other's gardens look like while eating cake at home.  Here are some first photos from some of my gardening group members. Others will follow.  (Apols for nightmarishly inconsistent font size. Blogger is hopeless at this and pasting photos and text messes up the code.) My neighbour Verity says,  " The spires of Camassia leichtlinii caerulea have followed white Narcissi Thalia in the beds. Bees covered the wonderful scented blossom of the 45yr old Malus, which I am trying to identify. The ferns on the bank are unfurling surrounded by acid-yellow Euphorbia (Spurge) and Forget-me-Not." The next three pics are hers:  Below is Lizzie's beautiful blossom in a tranquil evening scene: From Julia, five very varied insi